Foreign Language in High School Statistics for the US, UK and EU | Newsdle

Foreign Language in High School Statistics for the US, UK and EU

It is suggested that foreign language enrolment statistics at high school and college level have consistently fallen since the 2008 Global Recession. Despite this, there are still reasons to be positive. With the development of online resources, language learning is adapting and flourishing in a changing educational environment.

This article will assess foreign language study in high schools and colleges in the US, UK and EU. It will also give some insight into the changing market and expectations for coming years.

Foreign language enrolment statistics in the US

Among foreign languages in the US, Spanish continues to thrive in popularity, helped in large part by the fact that over 40 million people in the US speak Spanish at home. It is seen as a key language for trade and cultural exchange due to geographical location. Over the past decade, this trend has given rise to many more Spanish immersion schools opening in the US.

Language immersion schools in the US

Virtual high school language study in the US

The rise of ‘virtual high schools’ in the US are a significant factor in high school foreign language enrolment. Such schools allow students to enroll in courses that are not offered in their traditional classrooms. This means that students can study languages despite their school or district not having a language teacher for the target language. This makes language learning at high school level more accessible and reduces the financial burden on academic institutions.

Foreign language enrolment statistics at secondary schools in the UK

At Key Stage 3 in the UK (age 11-14) it is compulsory to study a modern foreign language. At both GCSE (age 14-16) and A-level (age 16-18), both modern and classical languages are taught. The most popular second languages at A-level are Spanish (8,000 students) and French (7,800 students), followed by German (2,800 students). Spanish overtook French as the most popular second language at A-level for the first time in 2019.

As a personal reflection having visited some Mandarin Excellence Programme schools, it is great to see students learning Chinese who would not otherwise have had the opportunity. At one school I visited, the students had recently been to a local Chinese restaurant with their teachers and parents. The students’ parents were amazed as their children ordered dishes in Chinese. The visit highlighted how great it is that students have embraced a language that their parents would not have had access to during their own time at school.

The Mandarin Excellence Programme has helped to increase Chinese language enrolment in the UK, although it would be great to see the initiative rolled out further to more public schools.

Problems with foreign language enrolment in the UK

A European Commission report in 2018 found that just 32% of 15- to 30-year-olds in the UK can read and write in a second language. This lags far behind Denmark (99%), Germany (91%) and France (79%). But what more can be done to promote second language interest among young people in the UK?

The UK still has a long way to go to make foreign languages more accessible to students across school types. An increase in tuition time and skilled teachers, coupled with different entry levels for higher age groups, will support this change. More emphasis should be placed on second language tuition in public schools, as foreign language enrolment throughout school age students is still heavily weighted in favor of fee-paying, private schools.

Primary schools are teaching foreign languages, but not for long enough

At Key Stage 2 (age 8-10) it is now compulsory for primary school students to study ancient and modern languages. French is offered in 75% of UK primary schools and Spanish in 25%. Next most popular is German at 5%. Primary school students in the UK only spend an average of 45 minutes per week in second language classes. People in the UK are often criticized for their lack of study of foreign language, due to the global dependence on English. Despite this, we must reflect on the level of tuition as a key factor in lack of second language take-up post-GCSE level in the UK. 45 minutes of instruction per week is simply not enough time to develop and flourish in the study of a second language.

Criticism has been leveled at the grading for foreign languages, particularly at A-level in the UK. It has been widely reported that students who speak a second language at home to fluent level (heritage students) are taking these languages to boost their A-level grades and give them a higher chance of attaining a university place. It is important that different levels of entry are offered at A-level for foreign languages going forward – a trend that has been growing in popularity at university level in the UK in the past decade. This will remove the barriers to entry of students studying foreign languages at A-level and offer a more level playing field.

Foreign language enrolment statistics at secondary schools in the EU

As of 2019, 96% of pupils in the EU were studying English as a foreign language. English is the most popular second language of study in the EU. Within the EU, 91% of students study English in school. Following English, the next most popular languages studied at high schools in the EU are French (15%), German (11%), Spanish (9%) and Russian (2%).

Linguistic diversity in foreign language enrolment in the EU

Linguistic diversity is a key factor in second language selection within the EU. The only countries within the EU where a majority of students are not studying English as second language are Belgium and Luxembourg. This is due to the language make-up of the countries which have areas that predominantly speak French, German or Flemish. Russian is also most often learnt in countries that border the Russian Federation, or by former members of the Soviet bloc.

Foreign language enrolment at colleges in the US, UK and EU

Since 2013, foreign language enrolment at US colleges has fallen by up to 23%. Amid the Covid-19 pandemic, foreign language enrolment at US colleges continued to fall. A similar trend was noticed following the 2008 Global Recession, where students elected to study more traditional subjects rather than those seen as ‘nice to have’.

Initiatives such as Generation Study Abroad in the US aimed to stimulate interest and growth in foreign language study among college students. Unfortunately, with the impact of the Covid-19 pandemic, less students have been able to achieve their ambition of study abroad programs, which has hampered this growth.

UK students have the perception that languages are challenging subjects and that it is difficult to attain high grades. This leads to many students opting for more traditional degree courses. More must be done to break down the barriers of second language study in UK schools and better communication given as to the accessibility of university courses. Indeed, many universities now often offer different tracks based on your language level on acceptance.

Why is foreign language study important in high school?

Is the future bright for foreign language education in the US, UK and EU?

Despite the downward trend of high school language enrolment statistics, the future is still bright for second language study. Global events such as Covid-19 and Brexit in the UK have opened new opportunities for intercultural exchange and language study. More funding and emphasis should be placed on language study throughout schools and colleges. With the improvement in online services such as Google Translate, it has become too easy to rely on third party input to communicate. Despite this, machine learning will never match the ability to communicate one-to-one in a person’s native language to promote cultural exchange and understanding. 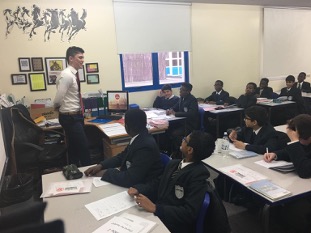 Sean McGibney speaking to students at Beths Grammar School about his experience of learning Chinese, living in China and founding Newsdle and The Chairman’s Bao.

Sean studied Chinese and Spanish at University of Leeds and founded The Chairman’s Bao alongside Tom Reid in his final year of study in 2015. Current Managing Director of The Chairman’s Bao, he has overseen the company’s growth from university bedroom concept to an international force in the EdTech industry with over 200,000 individual users and over 400 global partner institutions. Sean also launched Newsdle alongside Tom Reid and Oliver Leach in 2021, for students and teachers of Spanish and French. In his spare time, Sean is still a keen language learner and runner. He also sits on the Board of charity Leeds Irish Health and Homes in the UK.

Keep up to date. Join the Newsdle newsletter!
I'd love to subscribe to your newsletter...
Join Now
Newsdle operates within The Chairman's Bao Ltd, a company registered in England and Wales with company number 09222815.
Blog Contact Us Terms of Use Privacy Policy