A List of Newspapers in Spanish from Around the World | Newsdle

A List of Newspapers in Spanish from Around the World

Whether you want to stay informed about a specific part of the Spanish speaking world, see how local media report on current events, or look for new studying materials, Spanish newspapers are a great source for new perspectives.

While extensive, this list is far from complete, and the descriptions are aimed at providing brief context rather than a detailed overview of each newspaper’s focus and political leaning.

Newspapers from Spain in Spanish Language

A conservative daily newspaper in Madrid. 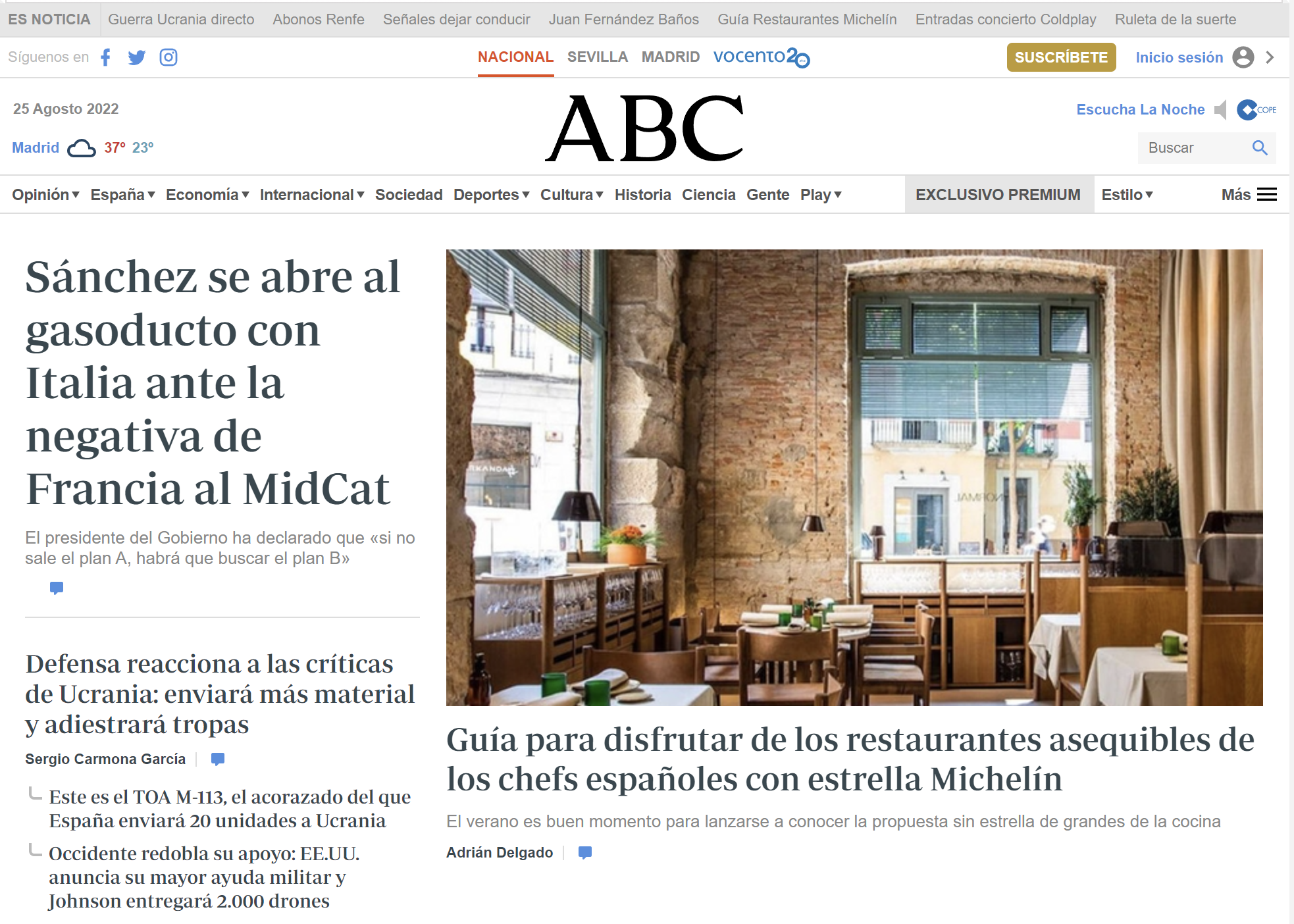 A center-left daily newspaper in Madrid.

A daily newspaper in Asturias.

A daily newspaper in Valencia published both in Spanish and Catalan.

A daily newspaper in Córdoba.

A daily newspaper in Guatemala City described as a leader in exposing corruption by Transparency International.

A daily newspaper in Managua.

A daily newspaper primarily in the north of Honduras.

A daily newspaper in San Salvador.

A center-left daily newspaper in Bogota.

A conservative daily newspaper in Cali.

A weekly news magazine in Bogota.

A daily newspaper in Merida, Yucatan. 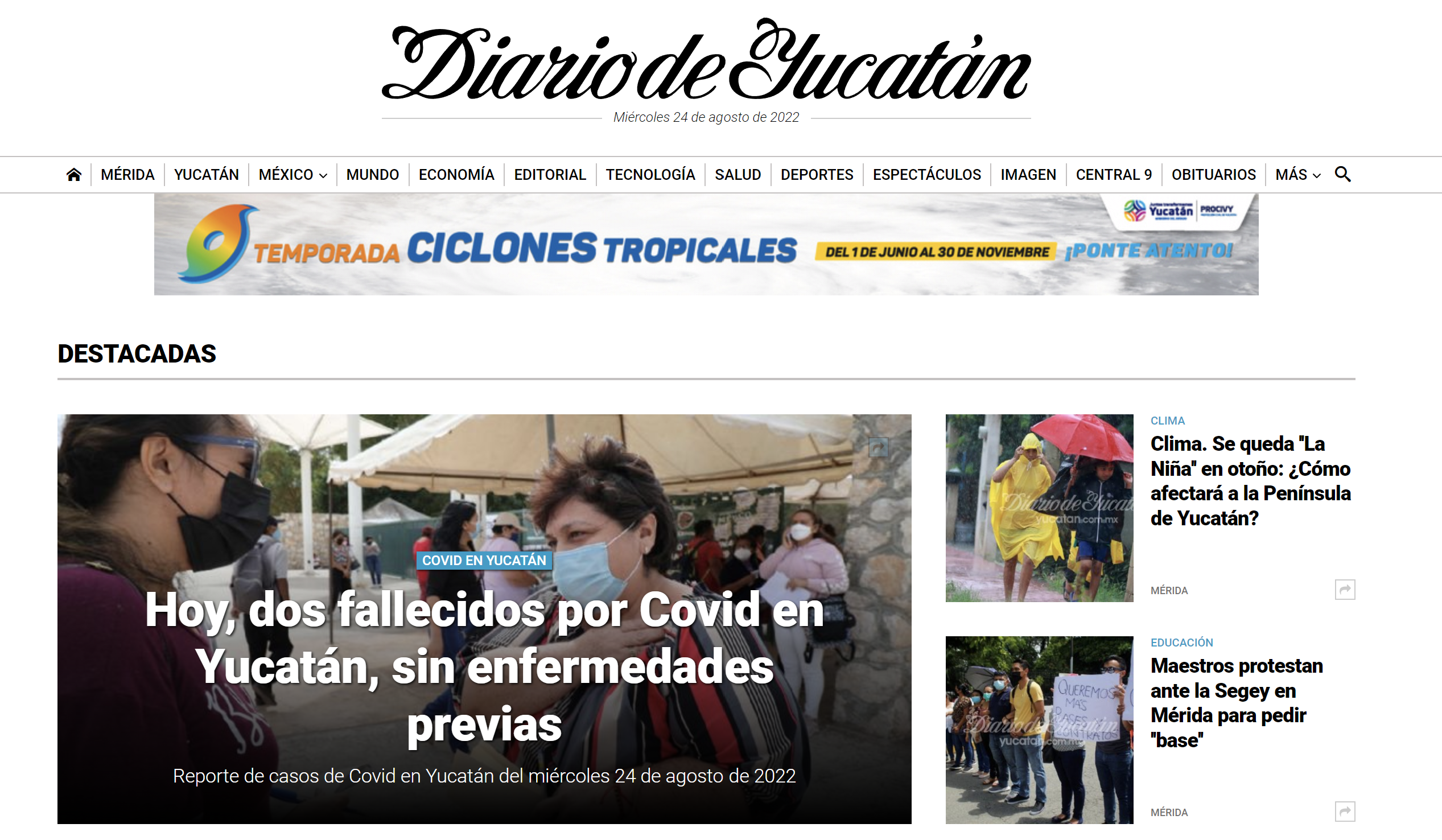 A daily center-left newspaper in Lima.

A daily conservative newspaper in Lima.

A conservative daily newspaper in Montevideo.

A liberal daily newspaper in Montevideo.

A daily newspaper in Caracas described in 2018 as one of Venezuela’s last independent newspapers.

The Spanish version of BBC news, a British news broadcaster.

The Spanish version of the CNN with focus on the Americas.

A newspaper covering financial markets and businesses in Latin America.

Newspapers are Shaped by Their Country

Newspapers in Spain and Latin America are as much a product of the history and politics in their countries as the BBC is in the United Kingdom. While reading newspapers from around the world can be incredibly informative, it is important to keep the conditions in each country in mind and to be critical of their contents.

In our home countries, we are usually aware which newsrooms have a particular political leaning and which news sources are the most reliable. The lack of this context and the speed with which it may change poses a particular challenge when dealing with foreign news sources.

The way newspapers report on an issue depends heavily on the cultural and historic background. For example, racism may be openly discussed in one country but is completely absent from public debates in another.

The way newspapers report may be representative of the sentiment in the population, reflecting for example how conservative the population is or how history is perceived in the country. For example, British and Argentinian newspapers will report very differently on the Falkland Islands/Las Malvinas.

However, there are also cases where newspapers only represent one part of the population.

Large newspapers are usually located in the capital or other important cities, providing perspectives that may differ greatly from those in rural areas.

Consequently, these newspapers may provide great insights into the government’s view but should not be interpreted as representing the country as a whole.

Freedom of Press in the Spanish Speaking World

The quality of any newspaper depends on the freedom of its journalists. The degree of freedom of press differs greatly between countries worldwide generally, and in Latin America specifically.

In 2022, Reporters Without Borders ranked Costa Rica in eighth place worldwide ahead of Germany (16), the United Kingdom (24), and the United States (42). However, Cuba (173), Honduras (165), Nicaragua (160), and Venezuela (159) are near the end of the list of 180 countries. Mexico, Guatemala, el Salvador, Colombia, Bolivia, Brazil, and Paraguay join these countries in the bottom half of the list. 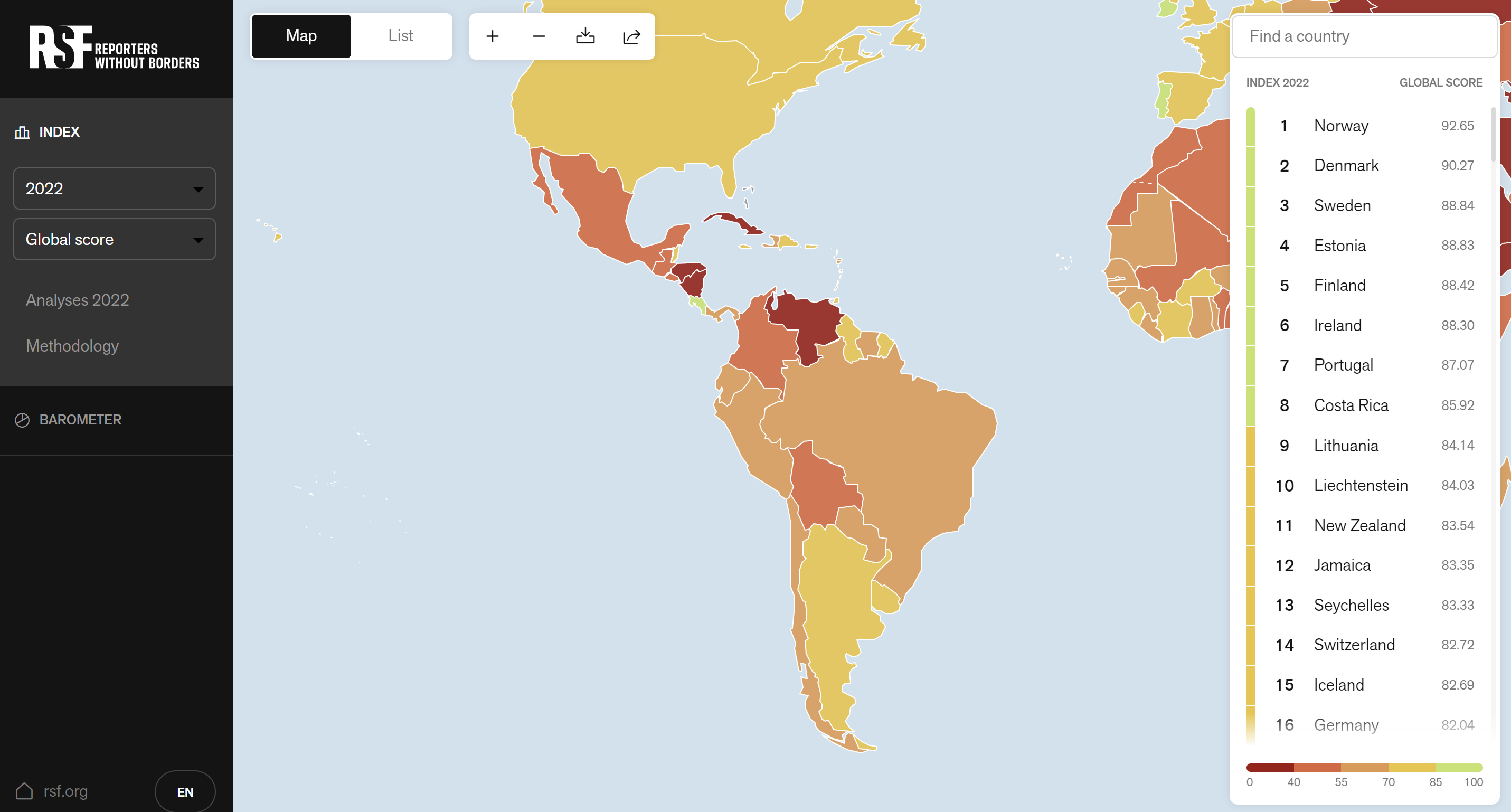 It is difficult to tell which newspapers provide independent analyses and what restrictions independent newspapers face in their work. And even if a country is criticized for its lack of freedom of press, there are courageous journalists and editors who provide valuable insights against all odds.

Tips for Using Spanish Newspaper Articles as a Beginner

However, they are also an excellent resource for reading comprehension, learning vocabulary, local language variations, and current events in the region you are interested in.

The benefits of using authentic material for language learning are discussed here.

Below are a few tips that make the first steps of reading Spanish language newspapers easier.

Spanish versions of international online newspapers such as the BBC, CNN, or Le Monde Diplomatique are not aimed at a local readership. This makes them an easier resource for language learners.

Because international newspapers in Spanish are not only aimed at locals, they are more likely to explain names and abbreviations helping understand an unfamiliar topic. While a newspaper in Costa Rica may expect you to know the names of important local politicians and the abbreviations of political parties or organizations, international newspapers usually provide this context and do not assume as much prior knowledge.

These newspapers are also written in more generic Spanish and feature less dialects. This can make them easier to understand and the words used are often more relevant for language learners.

To make the first steps even easier, consider newspapers that are designed for language learners such as Newsdle. These provide a great introduction into a variety of topics and are a great first step for building the vocabulary necessary to understand other newspapers in Spanish.

Start with a Single Newspaper and a Single Topic

As you start using Spanish newspapers as a resource, it is a good idea to become familiar with the style and language of a single newspaper and not to engaging with too many at once.

As between countries and regions, different newspapers have different styles which affect not only the content but also the language of the articles.

Similarly, focusing on a single topic such as local politics, business news, or sports allows you to learn the vocabulary and tone common to the topic. After all, there is more than just vocabulary that differentiates articles on the latest sports results from updates on the stock market.

Begin with Topics Familiar to You

Understanding a newspaper article is not only a matter of language skills but about understanding the context of the article.

While many articles provide some of the context in addition to the latest developments, a lot of the information remains unwritten.

For example, an el Salvadorian newspaper may not explain the role of the local gangs known as Maras for the region’s instability as any local reader would be painfully aware of this context.

Because of this, it is best to start with topics you are at least somewhat familiar with.

Journalists try to say as much as possible within a brief headline. Unfortunately, brevity is often the enemy of clarity. As in other languages, the headlines and lead paragraphs often contain highly specialized words that are not commonly used elsewhere.

While the headlines and lead paragraphs will provide you with an idea of what the article is about, do not worry about understanding every word.

If you think an article is interesting, it is worthwhile focusing on the body of the text and ignore the headline.

For more information on helpful reading practice sources, take a look at this article.

Newspaper articles in Spanish are a great way of learning more about or staying up to date with different regions in Latin America and Spain.

Thanks to the internet we have access to an incredible wealth of Spanish newspapers online and the list above provides a convenient overview to help you get started.

And if you get tired of reading, why not give Spanish news podcasts a try with this article.

After limited success learning languages in the German school system, Kolja discovered his passion for languages as a teenager during an exchange in Argentina. Since then, language learning has been a constant in his life including minors in Spanish and Portuguese when studying international economics at the University of Tübingen in Germany. Over the years, Kolja has experimented with countless language learning methods, from high school, university, and language school classes to in-person and online tutors, exchanges, apps, and textbooks. Beyond his passion for languages, Kolja has a deep interest in history and cultures having lived in Brazil, Argentina, Spain, Sweden, the UK, USA, and Belgium. Following a PhD in Finance in the UK, he currently lives in the United States working in Data Science and studying Mandarin Chinese.